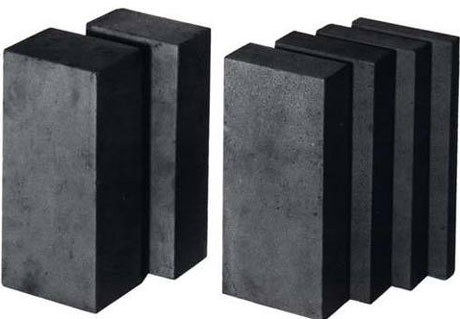 Carbon Brick is a kind of neutral refractory material that can resist high-temperature erosion, which is manufactured with carbonaceous as the raw material and added suitable binding agent. Carbon Brick can be used in the blast furnace to built furnace bottom and hearth with its features of good thermal shock resistance and low thermal coefficient of expansion. RS is a Carbon Bricks manufacturer, If you are in need of carbon bricks price, please click to Contact RS Refractory Company.

Carbon brick includes raw materials of anthracite, coke, and graphite, and binding agents of the pitch, tar, and carbolineum. Anthracite has few volatile components and dense structure, which is often used as aggregate and then added metallurgical coke with pitch as the binding agent when manufacturing carbon bricks for sale.

Carbon Bricks Manufacturing Process is similar to other refractory fire bricks’. But it is necessary to prevent carbon oxidation in the high temperature. So all the firing for the raw materials and products must be produced in the reducing atmosphere. Calcine anthracite to eliminate volatile components, sulfur content, and moisture before using. And improve the anthracite’s volume stability, mechanical strength, and inoxidizability. Dry coke to avoid the crack in the firing process caused by much more moisture contained. Fuse pitch and dry it in the temperature between 120~160℃ till its moisture is lower than 0.2%.

Because of the above-mentioned properties of carbon bricks, it is widely used to build the bottom and hearth of blast furnaces. In recent years, the scope of use has been continuously expanded, and carbon bricks have also begun to be used in the hearth and lower part of the furnace body. It can increase the continuous operation time of the blast furnace and extend the service life.

The performance of refractory materials for blast furnace hearth is one of the key factors affecting the life of blast furnace. In the development of refractory materials for blast furnace hearths, one is to improve the performance and structure of carbon bricks. Hot-pressed carbon bricks with high thermal conductivity, high purity, and micro-pores are used to overcome the damage to the hearth caused by alkali corrosion, carbon deposition, molten iron penetration, and other factors. The second is to adopt new hearth materials.

The “ceramic cup” technology developed by the French company Savoi has now been accepted and adopted worldwide. So far, 21 blast furnaces have adopted the “ceramic cup” technology. A blast furnace with a maximum volume of 5000 m3 will be put into use by 1997. The remarkable feature of the “ceramic cup” technology is that it greatly reduces the damage caused by the penetration of molten iron and reduces heat loss. This allows the 800°C isothermal layer, which is likely to cause embrittlement of the carbon brick, to move into the ceramic cup layer, eliminating the premature damage of the tap hole area caused by the increase of the temperature of the molten iron and the increase of the flow of the molten iron. Thereby improving the life of the hearth.

RS Kiln Refractory Company, a professional Refractory Bricks Manufacturer, has established complete quality system and implements whole staff and whole process quality control. All kinds of Refractory Fire Bricks for sale, strictly according to the ISO9001 standard, are exported to many countries such as Japanese, Indonesia, Iran, Kazakhstan, Vietnam, Korea and etc.

Scroll back to top
Quick Inquiry